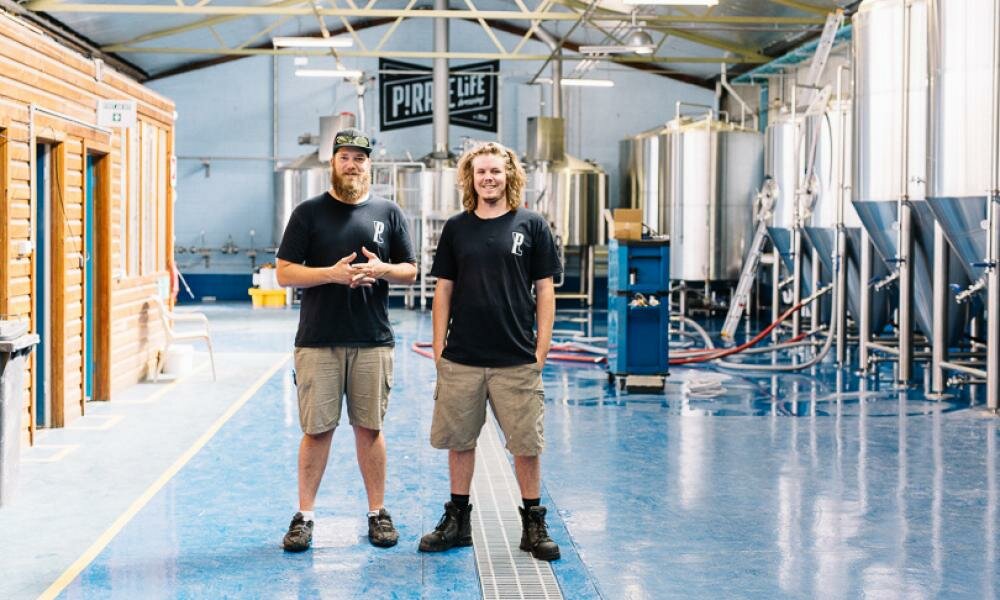 Each month, the International Beer Shop celebrates a different brewery as our Brewery of the Month, and we reach out to the hard working crew behind these amazing brews in an article we like to call Ask The Brewers.

Today we got a chance to present your questions to Jack and Red, founders of Pirate Life Brewing. This is what they had to say!

Tessa from Subiaco asks “Without worrying about sales or cost of production, what’s the one beer you’ve always wanted to make?”

J & R: We're pretty fortunate that Pirate Life is run by brewers and not accountants which pretty much means the beers we make are already produced without too much concern for the cost of production. That said, our biggest limitation is tank time so I'd love to be able to really dial in a cracking Pilsner and cold condition for a rather long time.

Dan from Bull Creek asks “What was the rationale behind having a session and a double IPA for so long before releasing the IPA?”

J & R: There was no way in the world we weren't going to launch with the IIPA. It was such an important beer for us to use as a springboard and help make a pretty powerful statement of intent when we launched. We think that balance is pretty important so having the Pale Ale bordering on IPA territory, the IPA was a luxury we could do without at the start. As soon as we felt it was an appropriate time to fill in the gap, we jumped at the chance and slotted the IPA into the core range. In truth, we we're going to launch with four beers. Throwback IPA, Pale, Imperial Red and IIPA. Unfortunately some raw materials have been elusive for the Imperial Red but I'm pleased to say it's not far off. Watch this space.

Jason from Scarborough asks “We’ve seen a big boom in IPAs and Bourbon-Barrel Aged Stouts lately, what do you think is the next frontier of beer trends?”

J & R: IPAs still have big way to go in Australia still so expect increasing growth across most Aussie breweries in this category. Safe sours (Gose, Berliner Weisse) will continue to grow pretty steadily because their refreshing nature absolutely suit our climate. They can be tricky to do well and clean though so if someone gets it dialed in with reliable production and decent availability, they''ll do really well from it.

How many of the beers that you make are on tap?

“We have two taps and on these taps we rotate around the full range. We have 9 beers in cans that are always available. These are our core 9 (IPA, Mosaic, , Stout, IIPA, Throwback IPA, Golden Era, Hopco, Pale Ale, Ballast Point). Plus we have our small batches and one offs that go into kegs.”Pirate Life customers at brewery door

What’s next to make and to add to the core range?

“From next month we will add a Pilsner to cans – this is the Nelson. It is a proper lager. We are only using Nelson Sauvin as a hop. It’s a unique bright profile and smashable at 4.8%.”

Pirate Life is only three years young but in that time, they have been able to build a business……why do you think it’s been so ‘successful’?

• And consistency of that quality

• With good accessibility of that product

At Pirate Life brewery 'bar'4. What inspired the team to start packaging in aluminium cans?

“It comes down to the fact that it is the best possible vessel. Unlike glass, no light can get in, plus it’s 30% lighter than bottle and aluminium is endlessly recyclable. Although a canning line is more expensive than a bottling line, it’s more ethical and environmentally friendly.”

What research was done to start doing this?

“The guys were focused on trying to protect the beer and through research, they had been aware for a number of years that aluminium is a superior vessel. The technology has evolved for cans and in 2014 it was a visual difference where you can actually market the whole can vs the limitations on a beer bottle.”

Check out their cans; the full ingredients is at the top of the can!

“We are all invested in the brand and we are with it to succeed/for the long haul. Red is an exciting person to work with and has the best recipes.

Mike Cameron has said from the get go that we don’t just want to make the current style but we want to be the new style. We want to come up with beers that people have not thought of before…show off ingredients and how delicious you can make a beer. Making beer that you’re proud of.”

How large is the team and how many are actively involved in the brewing?

“The cellar and brew kit is 7 full time staff on a 24/5 AM and PM and night shift. In the company with sales reps and admin it is 52.”

What is the capacity today?

From memory 3.61 million litres. We package everything on site; all to can and keg. 85% goes into can and the rest to keg which is for the pub.”