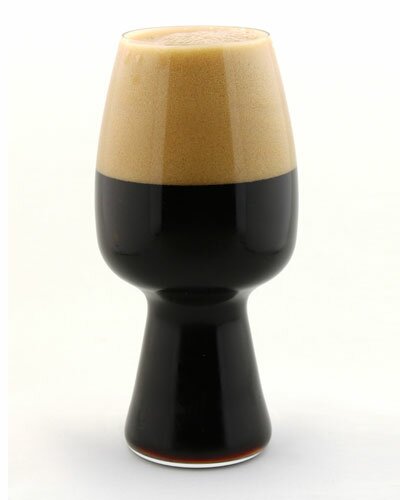 Description: Before 1700, London brewers sent out their beer very young and any ageing was either performed by the publican or a dealer. Porter was the first beer to be aged at the brewery and dispatched in a condition fit to be drunk immediately. Early London porters were strong beers by modern standards. Early trials with the hydrometer in the 1770s recorded porter as having an OG of 1.071 and 6.6% ABV. Increased taxation during the Napoleonic Wars pushed its gravity down to around 1.055, where it remained for the rest of the 19th century. Until about 1800, all London porter was matured in large vats, often holding several hundred barrels, for between six and eighteen months before being racked into smaller casks to be delivered to pubs. It was discovered that it was unnecessary to age all porter. A small quantity of highly aged beer (18 months or more) mixed with fresh or "mild" porter produced a flavour similar to that of aged beer.

Description: Simply called “Porter” in Britain, the name “English Porter” is used to differentiate it from other porters. A moderate-strength brown beer with a restrained roasty character and bitterness. May have a range of roasted flavours, generally without burnt qualities, and often has a chocolate-caramel-malty profile.

History: Originating in London around 300 years ago, Porter evolved from earlier sweet, Brown Beer popular at the time. Evolved many times with various technological and ingredient developments and consumer preferences driving these changes. Became a highly-popular, widely-exported style in the 1800s before declining around WWI and disappearing in the 1950s. It was re-introduced in the mid-1970s with the start of the craft beer era. The name is said to have been derived from its popularity with the London working class performing various load-carrying tasks of the day. Parent of various regional interpretations over time, and a predecessor to all stouts (which were originally called “stout porters”).

Description: Robust porter is a complex, rich, roasty ale. This style should always have a fair amount of roasted character, reminiscent of coffee and chocolate. The best examples also exhibit other malt character, such as bready, biscuit, and caramel flavours and aromas. The appearance of a good robust porter ranges from dark brown to almost black. Hop bitterness is firm, but the overall balance can range from slightly sweet to firmly bitter with the finish ranging from dry to medium sweet.

Description: The base for this style is typically a robust porter that has given smoky depth thanks to wood-smoked malts. Traditionally, brewers will cite the specific wood used to smoke the malt, and different woods will lend different flavours to the finished product. Smoke flavours will dissipate over time.

History: A stronger, more aggressive version of pre-prohibition porters and/or English porters developed in the modern craft beer era. Historical versions existed, particularly on the US East Coast, some of which are still being produced

Description: A Baltic Porter often has the malt flavours reminiscent of an English porter and the restrained roast of a Schwarzbier, but with a higher OG and alcohol content than either. Very complex, with multi-layered malt and dark fruit flavours. May also be described today as an Imperial Porter, with most versions in the 7–8.5% ABV range. Danish breweries often refer to them as Stouts, which indicates their historic lineage from the days when Porter was used as a generic name for Porter and Stout.

History: Traditional beer from countries bordering the Baltic Sea, developed indigenously after higher-gravity export brown or imperial stouts from England were established. Historically top-fermented, many breweries adapted the recipes for bottom-fermenting yeast along with the rest of their production.